Home > About > Staff and Leadership

The rabbis, staff and Board of Trustees work closely together to lead, inspire, challenge and empower congregants to create our kehilla kedosha: our holy community.

In the national Reform movement, Rabbi Kamrass currently serves as President of the Central Conference of American Rabbis, the 2200-member international body of Reform Rabbis, and as Board Member of Hebrew Union College-Jewish Institute of Religion and the Union for Reform Judaism. He was involved in the creation of the Reform movement’s two newest prayer books, serving on the CCAR’s Mishkan HaNefesh Editorial advisory committee, the Mishkan T’fillah Editorial team, and has also compiled Wise Temple’s congregational prayer book, Avodat HaLev. He was also a member of the team that drafted the CCAR’s 1999 Statement of Principles committee, on several committees, and previously served as Vice-President and President-Elect of the CCAR.

In the broader local community, Rabbi Kamrass has also served on the Boards of: Cincinnati Pre-School Promise, the Cincinnati Jewish Federation, Cincinnati Board of Rabbis, Cincinnati Jewish Community Relations Council, Planned Parenthood of Southwest Ohio, American Red Cross Cincinnati Chapter, Hospice of Cincinnati, Cincinnati Community Action Now, Family Services of Cincinnati and other community organizations. He has been active in local social action endeavors including establishing synagogue and Jewish community involvement in soup kitchens and homeless shelters and maintaining that involvement for 35 years. He has helped lead the growth and development of Wise Temple’s endowment fund and Plum Street Temple Historic Preservation Fund, as well been deeply involved in the ongoing preservation and maintenance of the historic Plum Street Temple.

Rabbi Kamrass is married to Renee Slotin Kamrass of Atlanta and they are the proud parents of three children and six wonderful grandchildren.

Rabbi Karen Thomashow is originally from Worcester, Massachusetts. She attended college at Brandeis University, where she majored in sociology and minored in social policy and Near Eastern and Judaic studies. Rabbi Thomashow earned her rabbinic ordination at Hebrew Union College-Jewish Institute of Religion (HUC-JIR) here in Cincinnati, where she wrote a thesis entitled, “A Lily and an Apple: A History of Jewish Interpretation to the Song of Songs.” She worked as a rabbinic intern for Wise Temple in 2006-2007.

From 2007 to 2013, Rabbi Thomashow was an assistant and then an associate rabbi at Holy Blossom Temple in Toronto, Canada. While there, she served on the boards of ARZA Canada, the Women’s Rabbinic Network, the Reform Rabbis of Greater Toronto and URJ Camp George. In addition, she was a part of the leadership team for the URJ’s Campaign for Youth Engagement.

In 2013, Rabbi Thomashow returned to Cincinnati to join the rabbinic staff of Wise. In addition to providing leadership in the areas of young family engagement, adult education and B’nai Mitzvah preparation, she is pleased to participate in the breadth of life and programming at Wise Temple. Outside our organization, she currently serves as the rabbinic co-chair of NOAM, the North American Association of Reform Mohelim.

Rabbi Thomashow is married to Yonatan Eyal, a historian of nineteenth-century America who is from the San Francisco Bay Area. They are the parents of Alma and Ethan.

Rabbi Goodman is a native of Dallas, Texas and comes to Wise Temple after serving as the Assistant Rabbi at Holy Blossom Temple in Toronto where he has been in that role since his rabbinic ordination from Hebrew Union College in Cincinnati in 2019. Prior to entering rabbinical school, he was a graduate of University of Texas, Austin.

Rabbi Goodman brings to us a breadth of rabbinic experience and interests. He is passionate about Jewish history, youth and teen engagement, young professional programming, Israel, and learning in its many forms. He has created Jewish education identity curricula for youth and for adults, has worked extensively in directing intensive youth leadership programs, as well as led and served as staff resource to various Israel experience for teens and college students.

Sally joined Wise Temple’s senior staff in 2016. She has many years of experience in finance, human resources, events and facilities management both in the nonprofit and for-profit arenas, which she applies to her role as Executive Director. As a lifelong member of Wise Temple, Sally values her relationships with the rabbis, staff and congregation, and looks forward to building many new relationships at Wise in the years to come

Sally grew up in Cincinnati. She received a B.A. in Economics from Williams College, moving back to the Cincinnati area after some time in Boston so that her children could grow up near their grandparents. Sally has a passion for the martial arts, having achieved third degree black belt in Taekwondo and taught both Taekwondo and self defense for many years. She is married to Tom Schott and has three sons, who also grew up at Wise Temple, and three stepdaughters.

Courtney brings a warm spirit, a passion for Jewish education, and a wealth of experience to this role. She comes to us from Temple Emanuel in Winston Salem, NC, where she served as the Director of Education. Prior to that, Courtney served as the Principal for grades 7-12 at Temple Rodef Shalom in Falls Church, VA, a large congregation similar in size to ours. Joining the Wise Temple team was a sort of homecoming for Courtney, as she spent three years teaching religious school at Wise Temple while she was pursuing a Masters degree at Xavier University.

Robyn is honored to serve the Wise Temple community as the Director of Family Engagement. She loves the emphasis Wise places on relationships, and she strives to develop meaningful programs to contribute to this mission. She works to make Jewish education and family programming fun and enlightening for both children and adults alike and hopes to help connect Jewish families to one another and to the temple.

Robyn has spent her career in various aspects of Jewish education. Prior to joining Wise, she was the Director of Education at the Valley Temple Religious School. Before relocating to Cincinnati, she was the School Counselor at The Alfred & Adele Davis Academy, the largest Reform Jewish Day School in the country. There, she helped develop each student’s academic and social/emotional learning, while fostering their Jewish identity. Further, she provided regular consultation and education to both teachers and parents to ensure student success.

Robyn holds a Master’s and Specialist degree in Education and licensure in mental health counseling, specializing in children and families. Along with her husband, Scott, and their two sons, Jordan and Joshua, Robyn loves the Wise Temple community and is pleased to be a part of the staff in this meaningful role.

Andrea often introduces herself as the lucky person who gets to be our Temple’s librarian. Lucky because we have one of the largest synagogue libraries in the land, with wonderful support from our rabbis and members.

Her family has belonged to Wise Temple since they moved to Cincinnati in 1979. That family now includes two baby granddaughters. Andrea has Master’s degrees in history and library science, taught history in public school as well as Wise’s religious school, and was a day school librarian. You can see why she thinks being the Wise Temple Librarian is the perfect position. Sharing a love of Jewish history and literature with children and adults at Wise Temple is hardly what she’d call “work.”

Stephanie and her family are fully engaged in the Wise Temple community. Stephanie believes that Wise Temple’s programming and warm welcoming community are what helped her family adjust beautifully to their move to Cincinnati in 2016. She is passionate about helping others engage in Temple life and about supporting others as they choose their Jewish path.

Originally from New Jersey, Stephanie attended the University of Delaware, where she majored in Elementary and Special Education. Stephanie loves to learn and instills that lifelong love of learning in all of her students.

When Stephanie is not in the classroom, she enjoys working out, reading and scrapbooking. Her family (husband, Jim and three children) is her pride and joy. Their weeks are busy with Krav Maga, gymnastics, swimming and school, but special family time is always set aside for Shabbat.

Stephanie connects and welcome families who are new to Jewish engagement or new to Cincinnati, helping them meet other young Jewish families and try out the variety of Wise Temple activities. She’s looking forward to meeting young families interested in a warm, fun and engaging Jewish and social community!

Jeff Stern is excited to support members of the Wise community as they build strong and meaningful relationships with one another through engaging and impactful programming. You may have seen Jeff in recent years at Wise, as he brings his musical background and experience to the community through participation as a cantorial soloist for Shabbat, b’nai mitzvah, and festival services throughout the year. He looks forward to continuing in this capacity and deepening his relationships in the Wise Community leading member engagement.

Jeff joins the Wise Temple staff with a long background in non-profit leadership, ranging from the performing arts to social services to education. Most recently, Jeff served as the Chief Engagement Officer for the National Runaway Safeline, leading the organization’s communications and fundraising efforts. In Cincinnati, Jeff has taught at St. Xavier High School and worked as the Director of Development & Communications at Crayons to Computers. He also continues to apply his musical background, performing in choral ensembles across the city. 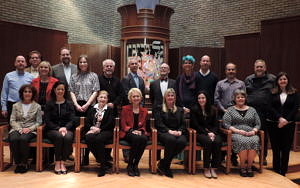 We are always looking for volunteers to join us on this journey. Contact any of us to talk about how you can use your passions, skills and interests to help make this a vibrant community. Call us. Introduce yourself. Reach out. We would love to get to know you better. We’re here to answer your questions, support you and partner with you.