Home > About > Our History > History of Plum Street Temple 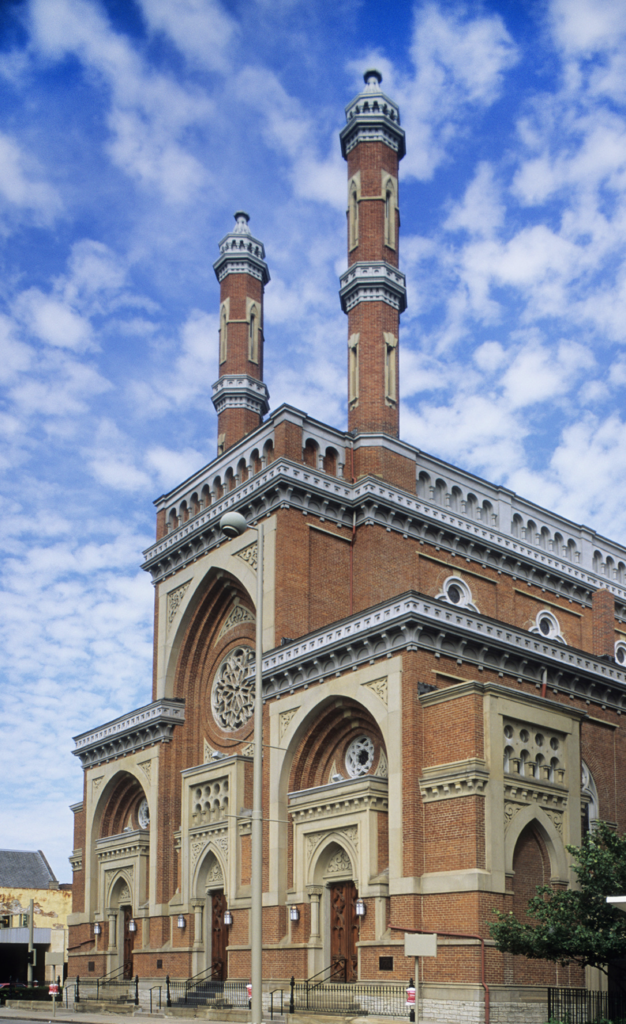 Prior to the Civil War, K. K. B’nai Yeshurun (Isaac M. Wise Temple) was gaining national prominence thanks to its rabbi, Isaac Mayer Wise. With his energy and vision, Cincinnati was quickly becoming a center of national Jewish life. The 200 families of the temple envisioned a magnificent building to house their growing twenty-year-old congregation. They purchased a lot on the corner of Eighth and Plum Streets for the sum of $35,000. Construction was anticipated to cost $55,000, but the delays and inflation caused by the Civil War meant that the building was actually erected in 1866 at a cost of $263,525. Today, the Wise Temple Archive Library holds the original ledger book with all construction costs for Plum Street Temple.

Designed by James Keys Wilson, a prominent American architect and the first president of the Cincinnati Chapter of the American Institute of Architects, the building reflects the Byzantine-Moorish synagogue architectural style that first emerged in Germany during the nineteenth century. It hearkens to the Golden Age of Spain in Jewish history, and reflects Rabbi Wise’s optimism that the developing American Jewish experience would be the next Golden Age. All other examples of such architecture in Germany were later destroyed by Hitler, and only one synagogue of a similar style exists in America (in New York). The complex design of Plum Street Temple mirrors many cultures: the tall proportions, three-pointed arched entrances and rose window suggest a Gothic revival church; the crowning minarets hint of Islamic architecture; the motifs decorating the entrances, repeated in the rose window and on the Torah Ark, introduce a Moorish theme; the 14 bands of Hebrew texts surrounding the interior were selected by Rabbi Wise and were chosen primarily from the Book of Psalms.

The building has been carefully preserved, with original flooring, pews and pulpit furnishings all still in use. Its chandeliers and candelabra, formerly gaslight, are now electrical, but still the original fixtures. The original pipe organ, a unique historical instrument built by the Cincinnati firm Koehnken and Company, is still in place and was restored as the Rockwern Organ in 2005.

Designated a national historic landmark and placed on the Department of the Interior's National Register of Historic Places in 1975, it was recognized then as a "splendid and exotic building." A restoration in 1994-1995 gave a renewed sense of vitality and sparkle to the building, which looks much the same now as when it was built over 130 years ago.

Plum Street Temple is not a museum to the past; it is a living, dynamic sanctuary with a congregation devoted to its maintenance and its continuation.

The building is used nearly every week for Sabbath services, programs lifecycle events, and other religious functions. Beyond its history and beauty, Plum Street Temple is the fountainhead of Reform Judaism in America. It was in this building that Rabbi Isaac M. Wise founded the institutions of Reform Judaism which, prior to his active career, had consisted of ideology without an institutional structure. From Plum Street Temple, Rabbi Wise built the Union of American Hebrew Congregations (1873), the Hebrew Union College (1875) and the Central Conference of American Rabbis (1889). He served as president of these three institutions while rabbi at K.K. B’nai Yeshurun until his death in 1900, and the Temple still hosts the annual ordination of rabbis from the Cincinnati campus of Hebrew Union College-Jewish Institute of Religion. This majestic synagogue continues to reflect Rabbi Isaac Mayer Wise’s vision of Reform Judaism, a religious movement with a distinctly American look, so that “a religious Jew can also be a citizen of a free country, a member of society, a reasoner of modern thought.”