Photos Are Her Prized Possessions 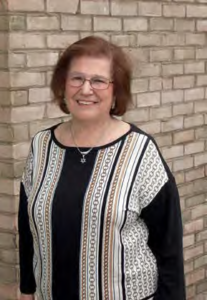 At age 13, Ora left Israel with her family and immigrated to Montreal, Canada. But she boarded the plane with a secret.

Tucked inside her underwear, hidden from security and from her mother, were three black and white photos. “I was forbidden to take pictures with me. It was just after the 1948 Israel War, and there was concern that there may be things in the background that were not to be seen.”

But Ora couldn’t resist taking a little of her childhood with her – a childhood she describes as fully Jewish, joyous, and special. She reminisces as she delicately points out each person in the treasured photos and recounts her memories of them.

This move to Montreal was not Ora’s first experience leaving her life and possessions behind. Her father’s jobs in the sugar cane industry, and even one in the American Embassy, were a mystery to Ora, but his employment took their family all over the world. Born in Jerusalem, Ora was first uprooted at age two when her family moved to Argentina. Later, they settled in Chicago, then feeling the pull of home, they returned to Israel. It was there that she, her mother and sister struggled through the 1948 War of Independence, while Ora’s father was away in Italy. “It was rough during the war. I had friends and a teacher who were killed. That could have been me – I was saved by a neighbor when a bomb landed where I had been playing.”

After Montreal, Ora made her last big move with her husband and first child to the U.S. for his job. At each move, Ora felt she was going to something, not running from something. And she speaks passionately about the people who were there to help with every transition.

“When I arrived in the U.S., I walked into an apartment with my baby in an unfamiliar country and I just started to cry. The apartment owner said to me, ‘Stop it. If you need anything, I’m your mother here.’ That’s all I needed – just someone to say they’d be there for me.”

In addition to the support of others, Ora’s positive personality helped her with the immigration process. “You could drop me anywhere and I’d be comfortable.” Maybe it’s no coincidence that Ora’s second career (after first being a chemist and a mom) is as a realtor, helping people, often Israelis, find their homes here. Ora also found new love and has been married to her husband Harry Dornheggen for 21 years.

Ora’s positive attitude isn’t because her life was easy. She had a lifetime of leaving possessions and people behind and the biggest blow came in 1989 when her husband died, leaving her with four young children. But Ora is resilient. The very next week she dove into realty full time in order to support her kids. “Even with these challenges, I wouldn’t change anything about my life,” Ora says as she cradles the black and white photos from Israel in her palm and their memories in her heart.