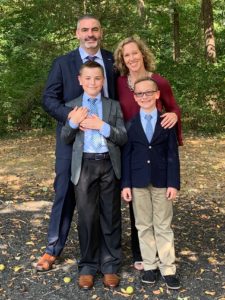 A Matter of Priorities

Drs. Andrea Rinderknecht (pediatric emergency medicine trained, now in private practice) and Jordan Bonomo (emergency medicine, neuro- and cardiac-thoracic critical care) have traveled to Honduras, South Africa, Haiti and Kenya on medical missions. But the beginning of their story starts at Brown University where they met and fell in love during their undergraduate studies. After graduating from medical school, Cincinnati came next.

Jordan: “We signed up for the residency draft as a couple. We chose Cincinnati for Children’s and U.C. They’re among the best for our disciplines. Andrea was near the top of our class and I just came in on her coattails.” They began mission work as residents. Their first mission was in the jungles of Honduras. The temporary clinics administered primary care to hundreds of patients a day, deworming many and sending them home with vitamins and analgesics.

Andrea: “Most health problems were the result of infrastructure issues—without clean water and sewage systems, they would get worms again in two weeks. It’s a vicious cycle. We thought of it as ‘bandaid’ medicine.”

Jordan: “We learned a hard lesson. It’s easy to march into a jungle with a bag of medicines and a stethoscope and think you’re doing important work, but it had no lasting effect. It was so frustrating as young, idealistic physicians who wanted to alleviate all the suffering we saw in front of us. Most times what was needed first was a well for water, then a school, and then a medical clinic.”

Be proud to be Jewish

In the far northeast corner of South Africa, near the Mozambique border, is a rural hospital founded by Anglican missionaries, where a handful of doctors ministered to 4.5 million Zulus. For six weeks, Andrea and Jordan’s duty: to relieve the local physicians. Jordan: “I was assigned the men’s ICU ward. Multiple patients per bed, head to toe. HIV, tuberculosis, cancer, all mixed together. The nurse (a nun) asked me ‘Do you believe in our lord Jesus Christ?’ and my heart sank. She was my link to the patients, and I wasn’t sure what to say. I thought about my rabbi when I was a kid who always said ‘Be proud to be Jewish. Never deny it unless it’s a safety issue.’ I took a deep breath and said, ‘Actually, I don’t believe in Jesus the way you do, I’m Jewish.’ She clucked, did a little dance, and began to cry with joy. ‘You are the first Jew we have met besides Jesus. All these patients will get better now.’ They saw Jews as the mythical chosen people from the Old Testament. All these faces were shining with hope, thinking I would be able to do something that doctors working in the hospital for years couldn’t do.”

Andrea: “Patients in austere, resource-limited environments have an amazing appreciation for even simple things we can provide, like immunizations. They see the diseases that kill their kids—meningitis, malaria, polio, tetanus…they’d do anything to get them vaccinated.”

In 2010, Haiti experienced a catastrophic earthquake. The death toll was well over 100,000 and millions were displaced. When Jordan and Andrea got there, over a million people were living in tents, violence was endemic, the largest cholera epidemic in the modern world was running rampant, and the fresh water flown in by the U.N. was being hijacked by bandits.

Jordan: “In a place fraught with chaos, we’re bound by our ethics and moral compass to do the right things—no administrators looking over our shoulders. We were completely out of our comfort zones. It was a growth opportunity, but a really stressful one.”

Andrea: “One-on-one connections were incredible. I spent time with a little boy suffering from hydrocephalus. He had no family. I carried him in my arms over ditches and through the mud to get him a CAT scan. The physical touch was so important to him and me. Here in the states, most physical contact with patients comes from nurses and we miss out on that.”

Jordan: “After Haiti came out of disaster mode, people had to start paying for care and couldn’t afford it. The hospital compound was surrounded by armed guards. Stability was an issue, and medical personnel lost their lives. Civil unrest forced a travel warning at the same level as Yemen. That made missions unsustainable.”

The world is dying…to get better

Andrea and Jordan had no plan to stay in Cincinnati beyond their residencies.  But after Andrea’s fellowship in pediatric emergency care and Jordan’s stints as an emergency physician with U.C.’s air care program and Cincinnati’s S.W.A.T. team, they were hooked.

Andrea: “By then, we were fully indoctrinated by the quality of life and cost of living compared to where we came from.” (San Francisco for Andrea, and Washington D.C. for Jordan) For now, they stick close to home, raising their two boys, Jonah (11) and Aaron (9).

Jordan: “There are opportunities to repair the world wherever you look. Socio-economic insecurity is all around us. There will be time to go out into the world again.”

Andrea: “And hopefully include the boys to witness how other people in the world live, and how blessed we really are.”