The Most Beautiful Place in Downtown Cincy

By Phil Armstrong in Cincinnati Refined (2016)

Let’s see. How should I start this? A) Something about how the Isaac M. Wise Temple is very old (1866), and that in and of itself is something to talk about?

B) Go into how the temple has a cool architectural history beginning with its rabbi and famed architect James Keys
Wilson?

C) Wait, wait… maybe the point about it being only one of two temples in the United States designed in this specific
architectural style?

D) Perhaps I should, more importantly, begin with how it has an active congregation and isn’t just a pristine, historic monument to the past?

No, I’m getting ahead of myself. Those are all great facts, but I need to launch with a grand statement worthy of the sheer majesty of this place. I’m going with Option E:

E) The Isaac M. Wise Temple is the most amazing place I’ve seen in the urban core—and, maybe, in Cincinnati as
a whole.

I’m not kidding. We see a lot here at Cincinnati Refined both on and off assignment. I’ve been in countless cool places, but this place… this is next level. 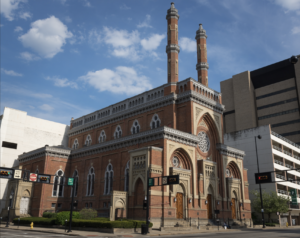 The Isaac M. Wise Temple was named for its rabbi at the time, and erected in 1866 at a cost of $263,525. Chump
change for a building of that magnitude today, but it was projected to cost a cool $55K during the planning stage. Due to post-Civil War inflation and spending so much time putting it together, they ran significantly over budget. Amazingly, the temple actually still retains the original log of expenses associated with its construction.

During WWII, many synagogues similar in size & magnitude to that of Isaac M. Wise Temple were destroyed in Europe. So that’s why, this building, by James Keys Wilson, is even more precious of a historic landmark. (Note: It’s one of only two synagogues in the entire United States modeled after the Byzantine-Moorish style. The other one is in New York City.)

Let me say that again in a different way. It is almost entirely unique in our country.

And it’s been used for worship ever since its completion. In 1994, a restoration began with the intent to rejuvenate
the aesthetic, returning it to the original look of the Temple (with the obvious modern additions added on).

See & Gawk At This Synagogue

We have a whole gallery of photos of this place for your viewing pleasure in the gallery above, but I’d be remiss if I
didn’t mention you can tour the Isaac M. Wise Temple yourself at 3:15 PM on April 23. Stay until 4 PM and you’ll
get an organ concert, too.