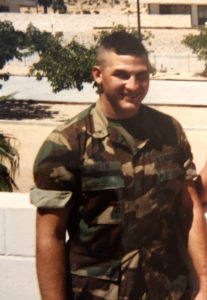 Zach Green comes from a creative family. His father was a principal bassist for the Cincinnati Symphony Orchestra, his mother a ballerina with the Cincinnati Ballet. So, the entire family was horrified when six-year-old Zach spent his waking hours turning the backyard into a mud-filled war theater and sticks into weapons.

In hopes of curing his military mania, at age 16, Zach was sent to a summer camp run by the Marine Corps. He was wretched, and it was the toughest thing he’d endured to that point in life, but his parents’ plan backfired. “When you train and march and suffer with other guys to achieve a goal, it’s an amazing feeling and I knew then it was what I wanted to do,” he says matter-of-factly.

So, at eighteen, Zach enlisted in the Marine Corps. He describes Parris Island boot camp location off the coast of South Carolina as “quite possibly the most miserable place on the planet.” Attending a Sunday religious service was compulsory. Zach was “burned out” after his bar mitzvah and had drifted away from his Jewish roots. But given the Episcopalian, Catholic or Christian service choices, he asked for a Jewish service. Every Sunday, the Marine Corps brought in a rabbi from Georgia for a one-on one with Zach. The rabbi smuggled in Moon Pies so Zach could have a “sweet experience.” Zach made the mistake of mentioning the Moon Pies to another recruit, and suddenly “there were 8 or 9 guys who wanted to come to Jewish Sunday services, but none of them were Jewish!”

Zach turns serious, noting, “There’s a saying ‘There are no atheists in the fox hole’. When things get bad, you have to have a next level and religion is strongly encouraged in the Marine Corps. Marines are the front line, the first to get killed. Having faith in God carries you. Training was miserable and I needed something to keep me company. I wasn’t a drinker. I wasn’t a “PT stud” who worked out every spare moment. So, I fell into Judaism, and began to reconnect with my faith.” Zach had two visual reminders of his faith, a Jewish star he wore with his dog tags, and a small Jewish bible he always carried on him at all times.

One Yom Kippur, Zach got to attend shul. Noticing him, the rabbi called him to the bimah, asked him to lift the Torah, and announced that it was the first time they’d had a Marine take the Torah from the arc. “I felt the tallit on my shoulders, draped over my military dress blues, and the weight of the Torah in my arms. It’s my most special memory as a Jew.”

For Zach, the similarities between the Marines and Judaism are striking. “When two Jews connect, it’s strong because of our shared struggles throughout history and time, struggles we retell to make sure they’re not repeated. It’s similar in the Marines. Training included weeks of studying Marine Corps history, so when I meet another Marine from Korea or World War II or Desert Storm, we bond instantly because we’ve been trained the same way, and we know the history that came before us.” Zach names another important similarity. “Since Marines are the front line, casualties are the rule. You accept that, the way Jews have had to accept the casualties of being Jewish.”

Shortly after Desert Storm, Zach graduated from the Marine Corps. A stranger noticed Zach in his dress blues and dragged him and his family into a bar. When people saw him, the bar was transformed. “The piano player started playing patriotic music.

People were jumping up in their chairs, waving little American flags. People were shaking my hand, thanking me, and buying me drinks.” It was in that moment that Zach’s dad realized the impact Marines can have on America, and he found the words to tell Zach that he was proud of his choice.

For eight years, Zach served our country, and in that time, he was given back his faith, stronger and deeper – a faith that guides him forward in his civilian life.