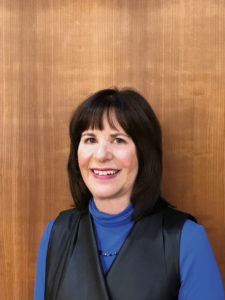 When Marcy Kanter was a young mother, her life revolved around her family, her volunteer efforts at the temple (mostly with the Sisterhood), her wardrobe consulting business, and her involvement in her children’s schools. “I lived in this little Jewish suburban mom bubble. It took up all my time. I felt like I could trust elected officials. Even if I didn’t vote for them, I felt they would do the right thing. Once my kids were in college, it was a real eye opener to discover that the next generation was getting involved in the election process and was actually excited about certain candidates.”

One of her first civic engagement activities occurred when she and other family members and friends participated in the 2017 Women’s March in Washington D.C. to support the message that women’s rights are human rights. Marcy realized that many diverse groups saw the march as an opportunity to speak up for causes that were important to them, including climate change, healthcare, antisemitism, common sense gun laws, and reproductive rights. “It was eye opening to see all these people united in one cause – our cause was for change,” she observed. Many messages at the march impressed her, and one she has committed to heart: “I am no longer accepting the things I cannot change. I am changing the things I cannot accept.” It was an energizing experience to share the passion that millions of people across the country and the planet have to make the world a better place.

In 2018, she participated in The March for Our Lives with her adult children in New York City and was impressed and heartened by the sight of so many young people standing up for their safety and futures.

Marcy also joined two activist groups working on making change through local elections, so she was already highly engaged when she was invited to attend the RAC (Religious Action Center of Reform Judaism) Consultation of Conscience in Washington D.C. with Amy Katz, where they witnessed many congregations who had brought large contingents to the event. It inspired them both to come back to Wise Temple and work with Rabbi Lindsey Danziger on the listening sessions and the Lobby Day planning committee. Marcy was elated when they were able to fill an entire bus with Wise Temple congregants eager to attend Lobby Day in Columbus.

Some of the things Marcy has taken away from her involvement in these events is that numbers matter, enthusiasm is important, and there is no quick fix for societal issues. “I learned from the Women’s March that numbers are important. Larger groups of people make a statement, and it’s good for the morale of participants. We hope to have trainings, panels and informational programs to educate Civic Engagement participants. It’s a very different process from going to a soup kitchen and spending a few hours making and serving food. That’s important, but Civic Engagement requires a different type of volunteering. It requires ongoing commitment and understanding that big societal issues can’t be solved overnight.”

“It’s rewarding to be involved in projects that provide opportunities to make systemic changes. When I asked some friends to come to Lobby Day, they agreed, and thanked me. They said they were tired of sitting at home at night yelling at their TV but not doing anything,” Marcy says with a smile.