Horror, outrage, grief. The impact of having congregants who lost a family member in the Parkland shooting in February, 2018 was a powerful impetus in the creation of the Civic Engagement (CE@Wise) program. Amy Katz was one of several congregants who wanted to do something concrete in response. At Rabbi Kamrass’ suggestion, Amy contacted Jenna Shaifer and they decided to form a steering committee which included Amy, Jenna (co-chairs), Terry Susskind, Marcy Kanter, and Rabbi Kamrass. 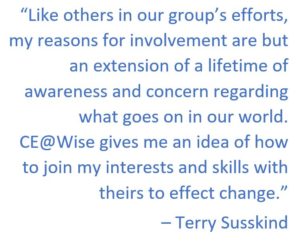 “We convened listening sessions and invited congregants to talk to us about gun violence and other issues that concerned them at both the local and state levels,” Amy says. “There wasn’t just one issue we could galvanize around. A lot of issues were raised, and the most frequently mentioned were increasing voter participation; reducing gun violence; criminal justice reform; and securing reproductive rights for women.” These concerns were in alignment with issues identified by RAC (Religious Action Center of Reform Judaism) Ohio.

“We want CE@Wise to be multi-generational and non-partisan. And we want our efforts to provide engagement with issues that are important to our congregants and that also deepen engagement with each other,” Amy explains. Congregants have engaged so far to: register voters, participate in marches, lobby legislators, plan educational programs on social problems, and collect signatures to support pending legislation. The CE@Wise steering committee zeros in on how best to engage congregants on the issues that matter to them and creates opportunities that have the potential to influence outcomes. The committee is creating a calendar including marches and other events “to build a community of people who rely on us and on each other to inform, connect, and influence system change. CE@Wise offers congregants another way to express their Jewish values,” says Amy. 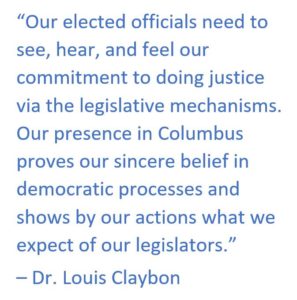 On March 24, 2018, Wise Temple participated in Cincinnati’s March for Our Lives, concurrent with the Washington D.C. student-led demonstration supporting legislation to prevent gun violence in the United States (prompted by the Parkland shooting). Next was a city-wide “get out the vote” initiative organized by Rabbi Lindsey Danziger of RAC Ohio. Then, on November 13, 2019, over 60 Wise Temple congregants participated in the state-wide RAC Ohio Lobby Day at the Columbus statehouse.

The agenda included networking with Reform Jews from across Ohio; briefing on Ohio’s state level political system and how to act strategically; and learning about and advocating for two issues (gun violence prevention and criminal justice reform) in front of elected representatives. The slate of speakers included Dr. Abbie Youkilis, Wise Temple congregant and aunt of Jaime Guttenberg, one of the murdered students at Marjory Stoneman Douglas High School. Abbie noted: “Gun violence is not pancreatic cancer. We know the cure.”

Many CE@Wise initiatives are being planned, including Get Out the Vote efforts, marches, and educational programs. Want to learn more? Visit the Civic Engagement page at wisetemple.org to send the committee an email.

“After RAC Ohio Lobby Day I heard from legislative offices that the Statehouse was abuzz with the powerful visits from our members. When people of faith show up en masse and speak about our values it changes the conversation and our representatives listen. I am so proud of Wise Temple for showing up for their values and bringing a large delegation to Columbus. Our criminal justice reform and gun violence prevention bills are still working their way through committee and there will be more opportunities to take action this year.