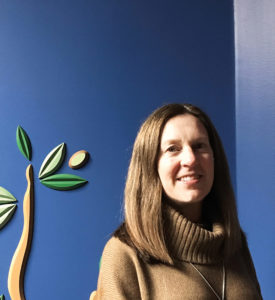 Last fall, Karen Goodman and her husband Richard became empty nesters. And in this new life space, Karen has found a way to give voice to her Jewish values. Although she and Richard are both from Amberley Village, they didn’t solidly connect until they found each other as young adults living in Boston. Marriage and three children later, a confluence of events led them back to Cincinnati, and Wise Temple, where Karen teaches about nature and does yoga with the kids in the Open Room on Sundays.

Karen grew up in a traditional Jewish home. She first went to Israel for her older brother’s bar mitzvah when she was five. “I was so young, but I remember it felt like a truly incredible place. This passion for Israel is a big part of my Jewish values.” She spent a year in Israel on a kibbutz in the Negev and in Jerusalem before gap years were a thing. “It was transformative in terms of my love for Israel and solidified Judaism as my cultural, spiritual tradition.”

Her mother was socially progressive – a feminist and environmentalist, committed to social action. Karen recalls, “She was very proud to be a woman, and showed me and my sister that it’s possible to be independent, to hold strong, deep values as a female, and still be a good mom too.”

Karen strives to parent by example, just like her mom and dad did. She believes that now is the time in her life to support the young change-makers who envision a better world. She is compelled to use her voice not only for herself and her own children, but for all those who don’t have the resources, the finances, or who are fearful to speak up for themselves.

“Truthfully, I feel most comfortable doing social action with my fellow Jews, which is how I ended up working with Civic Engagement. At this time in my life and with how I’m feeling about the world around us, it was a natural fit for me and it came at the perfect time,” Karen explains.

Regarding gun violence Karen says, “I just cannot look at news clips of killings – all of them: mass shootings, suicides, murders – and just say ‘Oh well, that’s how it is.’ I truly believe gun violence is a public health crisis and should be treated as a public health crisis. There’s nothing political about it. It’s really hard to stomach the idea that nothing can be done.”

She has equally strong feelings about reproductive rights and criminal justice reform. She hopes to contribute to the groundswell by helping and encouraging friends to channel the passions they have for societal issues into small doable actions that could lead to bigger ones. “We all have to show up. We should be able to leave our kids in a better place and to teach them how to ‘move the needle’ because we’re not going to be able to do it forever. The more people we get involved, the better!”