History is in the Background

With the theme of this issue of Kesher being about our new Civic Engagement program, a photo shoot featuring five congregants, gathered as if they are at a rally, made perfect sense. Behind them are Wise Center’s American and Israeli flags. 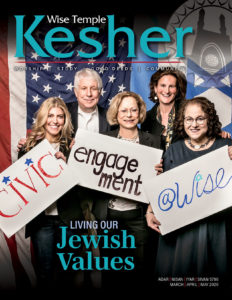 Like the background of any good photo, the double flags certainly play an effective role in making the foreground understandable, credible and visual. However, there is more to this background than just their aesthetic appeal in the photograph. The flags, specifically the American flag, have quite a history with our temple.

Rabbi Isaac Mayer Wise symbolically showed that America protects freedom of religion and conscience, when he placed a Bible and an American flag inside the cornerstone of Plum Street Temple. The May 19, 1865 issue of the American Israelite quoted Rabbi Wise’s remarks on the occasion, as he referred to the Bible “covered…with the flag of the United States, the symbol of power, freedom, and justice. Under the protection of our national flag, liberty of conscience shall be sacred and inviolable.” It is also widely believed, although not historically documented, that Plum Street Temple was the first synagogue to have an American flag permanently displayed on the bimah. While the six-pointed Magen David star adorns the Eternal Light at Plum Street Temple, it is thought that the five-pointed stars on the bimah chairs may represent the stars of the American flag. Adding credibility to this assertion is Rabbi Kamrass’s belief that the five-pointed stars were carved into the chairs to reflect Wise’s affirmation of the Jewish community’s role and place in America.

It is often said that every picture tells a story but, in some pictures, that story is just a little further back.

Read stories about Civic Engagement from the latest issue of Kesher