The Faces of the Future 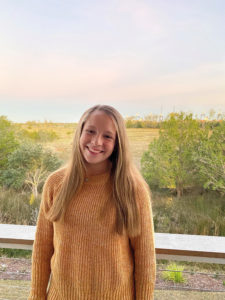 Eliana Goldner is not waiting to make the world a better place.

Sophomore Eliana Goldner plays soccer, both elite and on Turpin’s JV team. She’s also in Student Council, Key Club, and Innovation Club. And she’s WOOTY’s Vice President of Programming, so she’s all in on participating and being involved.

Last year two kids from my school committed suicide, both by guns. I knew one boy. He was a star athlete who worked with special needs kids. It was a shock to everyone. Maybe without a gun, he would have had to work on his problems instead. When I heard that Civic Engagement would be advocating for better gun laws, I wanted to help with that – if those two kids hadn’t had such easy access to guns, they might still be here.

Growing up, my parents would ask me what I thought instead of telling me what they thought. It helped me comprehend what I was seeing and listening to and to form my own opinions. I think a lot of kids are sheltered by their parents’ opinions, and that influence closes off their minds. Maybe some would have different opinions of their own. Lots of kids are living in bubbles that I would love to pop someday!

Before Lobby Day, I considered studying engineering of some kind. I definitely wanted to do something to help people but wasn’t sure what. After Lobby Day, I began thinking about a government or political job where I could make a difference to peoples’ lives. I want to make as big an impact on the world as I can and do as much as I can with the time I have. I’ve been taught that as a Jew, it’s important to stand up for what I believe in, not to sit in silence as our neighbors are treated unfairly.

I brought a friend who wasn’t Jewish to Lobby Day. She learned a lot about Judaism from it and told me “You know I’m not Jewish, but I really like Jewish values.” When we told our friends the next day about it, they thought it was cool. It felt good to fight for something that so many people believe in. I would love to see more teens involved in stuff like this. It has a bigger impact on adults when a lot of kids come together to express how they feel. We will have to deal with what adults are leaving behind. I think it’s important to learn what we can do with our voice. Even though we’re young, we’re the next generation, and if we want to see change in our world, we need to start now.

Abby Rosenberg is not waiting to make the world a better place. 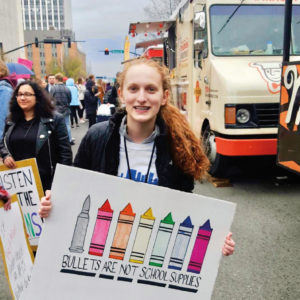 Abby Rosenberg’s got big plans. She’s interested in the ethical and societal implications of medicine and wants to be a trauma surgeon for a humanitarian organization like Doctors Without Borders. As WOOTY president, she focuses on bringing social action to the forefront of the high-schoolers’ agenda, like the interfaith MLK Lock-In that happened in January.

Last year I went with other Wise kids to a lobbying weekend in D.C., over President’s Day weekend. It was a big convention with teens from all over the U.S. We wrote speeches and went to Capitol Hill to talk to senators, representatives and aides. It was the first time I did anything like that and it was a really good experience.

A Case for Caring

When I learned the Civic Engagement group was participating in Lobby Day, I was excited, and got my friend Bettina Ernst to go with me. We were surprised there weren’t more teens, but it was a great way to show how much our community cares. I ‘ve known most of the people we lobbied with since I was a little kid. We lobbied for gun violence prevention, for the STRONG Ohio bill. 90% of people support background checks, but still nothing has been done in terms of tracking laws. It’s frustrating and doesn’t feel like I’m making a difference. But I had a meaningful conversation with Sedrick Denson, one of my representatives. He told me how much he looks up to young people. I had a moment of “This really matters.”

It’s scary to think about how gun violence could happen to us at school, but it’s easy to lose sight of people who can’t fight for themselves and need to be fought for even more than ourselves. Gun violence has been happening in inner cities for a long time and gets no attention. Or there’s criminal justice reform that doesn’t directly affect our community. It’s not just the issues that are going to impact us. We need to think about other people.

Our Kulanu class has helped me to look at social action from the Jewish perspective – to think deeply about why I think what I do, why It’s super important to have productive conversations with people who have different beliefs from me, to truly listen to them and how to explain my positions to them. If we only ever work with people who have the same beliefs, and we only ever talk to people who reinforce what we think, we’ll never get anywhere. With how divided our government is today, it’s so important to know how to have constructive conversations with people on both sides.