Mending Kids One Surgery at a Time 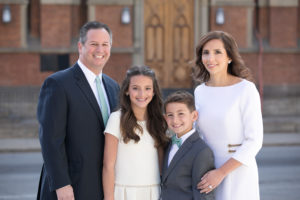 Dr. Jason Frischer and his wife Lori only meant to stay in Cincinnati for a few years, just long enough for him to experience working at, arguably, the world’s most prestigious pediatric hospital, Cincinnati Children’s Hospital Medical Center (Children’s). “We’re both born and raised New Yorkers. I couldn’t spell Cincinnati or find it on a map. The tri­state to me meant New York, New Jersey and Connecticut!” But 12 years later, they are still here and love what a smaller city like Cincinnati has to offer. To Jason and Lori’s amusement, their children—Elle (14) and Cal (10)—speak with a midwestern accent.

Jason grew up wanting to be a doctor, and by 7th grade had settled on pediatrics. He studied general pediatric surgery, then went on to study pediatric colorectal surgery, for which there were very few surgeons in the country. Jason now directs the Colorectal Center at Children’s.

Jason spends long hours in the operating room between brief snatches of sleep on an office couch and frequently works 7 days a week so he can keep worried parents updated on their children’s conditions. Caring for kids with serious health problems is all he ever wanted to do. Jason says, “I’m not as selfless as it sounds. I like helping people. Their gratitude makes me feel good about myself. When a little boy proudly shows me that after years of wearing diapers, he’s wearing ‘big-­boy pants’ or strangers in a restaurant tell me that their daughter I operated on after a horrible car crash is healthy and preparing for college, I realize how lucky I am to do what I do.” He feels this way, even though every outcome isn’t so positive. His eyes fill with tears as he talks about a 9-year-old girl whose life he couldn’t save after she was shot in a home robbery gone wrong.

Doctor on a Mission

About seven years ago, Jason was feeling overworked and burned out, suffering a mid-career crisis. He found himself on the web, googling pediatric mission trips, and discovered a non-profit in California called “Mending Kids,” that specializes in providing life-saving surgical care for kids all over the world.

Jason set out on a fact-finding trip, and after five flights and 42 hours, landed in Mwanza, Tanzania. There he toured the Bugando Medical Center (BMC), a 900-bed hospital serving 16 million people in Tanzania, Uganda, and Kenya. He was introduced to Sister Alicia Massenga, a general surgeon (and nun) with an intense desire for a pediatric surgery program to address the long list of children in need of life-changing surgeries. The trip inspired him to return with a team, six trips to date.

Jason’s team—mostly staff from the Colorectal Center at Cincinnati Children’s and their collaborative partners who return year after year with him—includes surgeons, nurses, anesthesiologists, radiologists, and operating room technicians. Just flying in for a week to operate on as many kids as they could (a grueling, exhausting task by itself), would only put a bandaid on the problem. “We can’t fix every kid in the week we’re there. Our goal is to work toward the hometown surgeons, doctors, and nurses taking care of the kids themselves. We train them to do surgical procedures and post-op care, and how to teach patients to manage their conditions to achieve normal lives.” They’re also working with Sister Massenga’s staff to develop better ways of handling medical records and improve operating procedures so the pediatric program at the BMC can eventually function independently of the Mending Kids mission teams. Sister Massenga and her head nurse Carol have visited the Colorectal Center at Children’s, and a tremendous amount of questions and advice flow back and forth between the staffs through email and social media.

Jason’s career has been reenergized, thanks to his Mending Kids involvement. “It’s humbling, going back to basics. It grounds me to learn from someone who has so few resources to work with. They have workarounds and tricks I don’t know. I’m thankful for my team, and all we’ve learned and accomplished there.”