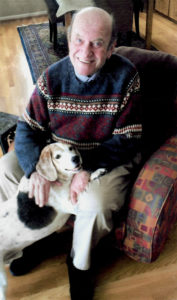 Life in America is better than Conrad Weiner’s best dreams.

In 1941, when Conrad Weiner was just 3-½, he and his mother, uncle, aunt, and cousin were sent from their homes in Russian-occupied Bukovina, Romania, to a labor camp in the Ukraine. Conrad’s father had been conscripted into the Russian army and died on the front line.

In this fraught time, Conrad was saved from death twice. His uncle Oscar alternated between carrying him and his older cousin on the march to the camp. Anyone who couldn’t keep up was shot on the spot. At the camp, Conrad once became desperately ill, and his mother was urged to let him die, but she fought for his survival, climbing a cherry tree to make him a tea brewed from twigs and stems.

“I remember always being very hungry and very cold; I remember people being sick and dying all around us; and most of all, I remember my mother struggling to keep me alive.” Conrad was eight when WWII ended and the camp was liberated.

During the chaos that followed, they wandered, rejected, from place to place. Israel was not yet born.  Most countries refused refugees, but finally Conrad, his mother, uncle, aunt, and cousin were repatriated to Romania, resettling in his grandfather’s half-destroyed house with other family survivors.

Conrad’s mother remarried and they moved to Arad in Transylvania. Conrad did well in high school, but college wasn’t possible ‒ he was Jewish and considered a “bad risk”, with relatives in both Israel and the U.S. His only option was the trades, and luckily, he secured an entry level position in a clock factory.

Conrad’s stepfather’s parents lived with them, and were too old to travel, so they stayed in Romania, as Jews all over Europe flooded into the newly founded Israel. Then the borders closed, and for 14 years, Conrad annually petitioned the Romanian government for exit visas. In 1960, Conrad and his parents were sponsored by a distant in-law in Pittsburgh.

“When we finally arrived in the United States, it was an indescribable feeling to actually see the Statue of Liberty, not just on a postcard. I felt like a bird spreading my wings. I just felt free.”

Conrad began learning English (one of the five languages he now speaks), and in 1961 was drafted into the U.S. Army. He was happy to pay back Uncle Sam. “The Army, in their wisdom, of all the places in the world, sent me to Germany. But it was a wonderful experience. I knew the language, formed lifelong friendships, and didn’t experience any anti-Semitism. I learned the difference between the Nazis and the Germans of the day.”

After the army, he moved to Cincinnati and the gifts of American life began to manifest. He met his wife, got two degrees, and began a successful career. “Coming to the United States turned out better than I imagined in my best dreams. I have two sons, college educated and on their own, two beautiful granddaughters, and a comfortable life, all because of the opportunities we had in America.”

Today, Conrad travels the region, speaking about the Holocaust for the Holocaust & Humanity Center, where he says he gets a more engaged response from gentile kids than Jewish kids. “Maybe they’re over-exposed or just trying to get over it, but I try to help all kids understand that indifference can do as much damage as hate, and that they should actively stand up for what’s right.”

“I agreed to start sharing my story 13 years ago. I was substitute teaching and a student who learned I was from Europe asked if I had met Hitler. I responded that Hitler and I traveled in different circles. The student then asked what I did during the war, so I told him I was in a concentration camp. In total seriousness, the kid asked, ‘What were you concentrating on?’ He truly had no clue. This was at a school that prepares our future leaders. I knew then that I had to start telling my story.” Conrad has given hundreds of presentations about his experience, including to a two-night crowd of 1000 Kentuckians where he stayed for an extra hour to answer endless questions from those eager to learn.

His recollections, bolstered by the memories his mother, aunt and uncle shared at Friday night family dinners once they were gathered the U.S., are a haunting reminder to us all. His family admonished him, with tears in their eyes, to “Never forget, never forget.”